I’m looking forward to starting researching and putting together my written dissertation soon. The current plan might be slightly ambitious, but I take it as a good sign that the more I thought of it and read on the topic, the more eager I was to go and talk to people, see the buildings, and write about them.

Bucharest has inherited 371 blocks of flats [1] that have now been identified as being under severe seismic risk and a threat to the general public, endangering the lives of approximately 450 000 people. Many of these blocks have been originally built as collective housing for the city-dwelling working class and now occupy prominent central areas of the city with high occupancy levels.[2]

With a lifespan that has already seen several political regime changes and social reforms in the country, these buildings are seen to be in rapid decline and increasingly inappropriate for contemporary living expectations. A case study of 356 of the endangered buildings, all within close proximity to each other, would offer a rare insight into collective living conditions for the city-dwelling workers in pre and interwar period Romania and highlight the impact of these examples of domestic architecture, not just when they were in their prime, but also through decay and death. There are currently few publications that have analysed Romanian pre-socialist collective housing typologies and fewer that approach the issue of their rapid decay from an architectural point of view.
The built environment, as a lasting reflection of society, through deterioration reveals subdued issues that transcend the realm of columns and walls. Many of these buildings have bullet “wounds” on their façades, some have been altered to better accommodate more workforce, and all have been neglected once the collective memory identified them as scars on the urban fabric rather than an integral part. Therefore, the narrative of the dissertation would alternate between an objective case by case architectural observation and an abstract personification of the originally worker’s homes with immaterial elements of importance. 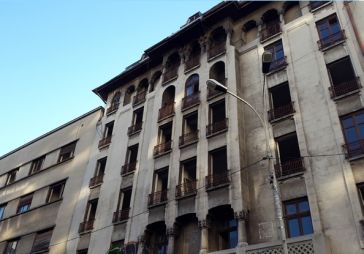 A degree of speculation will be present in the parallel throughout. Starting from an objective observation of the buildings’ current structural stability, scenarios could be established as to how the buildings will perform and when they are likely to fail, ultimately creating an image of a dystopian future. The social interactions and characteristics of past living would be informed by existing research in other disciplines [3] and speculated in accordance to elements of domesticity found on site. The progression from a larger, urban scale, to a facade level and then domestic/flat level will surface face potential contradictions in architectural characteristics and contrast the two worlds of public / private and onlooker / resident. It will also underline the current erroneous perception that these often art-deco examples of architecture are in fact socialist blocks, as the collective memory of the city has created a direct comparison between the plain socialist construction and derelict pre- or interwar block of flats. [4] As a culmination, by analysing data produced by the CERSIS group at T U of Civil Engineering Bucharest, I aim to describe a dystopian future in which these building collapse/”die”. Their tragedy extends beyond human casualties, as it also has the potential to erase the history and significance of Bucharest’s nucleus.

I welcome all thoughts or contributions on the topic! I’m rather keen for this study to be of use to someone, at some point.